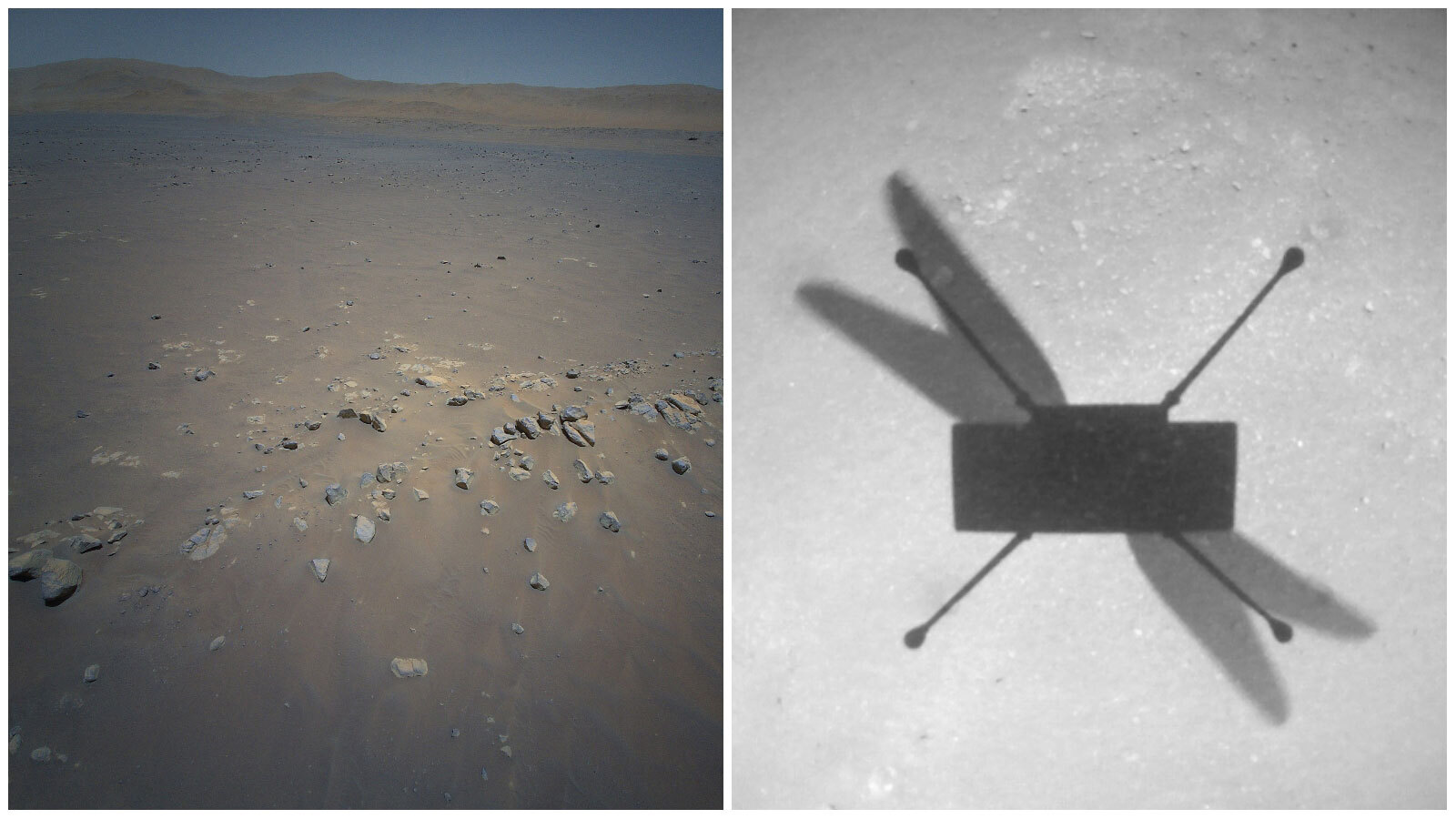 Ingenuity Images of Flight 10​: Ingenuity’s Mars Helicopter took the image on the left with its navigation camera and the image on the right with its color camera during its 10th Flight, on July 24, 2021. Credit: NASA/JPL-Caltech. Full image and caption ›

The prestigious honor recognizes the pioneering rotorcraft for its history-making flights on the Red Planet.

The “little helicopter that could” has garnered attention, fans, and numerous accolades, with the latest coming from Aviation Week Network in the form of a 2021 Laureate Award. The Laureate Awards honor “extraordinary achievements in aerospace.”

When the 4-pound (1.8 kilogram) rotorcraft hovered on Mars for 39.1 seconds on April 19, 2021, it was the first instance of powered, controlled flight on another planet – a true Wright brothers moment. Since then, Ingenuity has chalked up 11 flights, with a total distance of just over 1 mile (2.2 kilometers), reaching an altitude record of 40 feet (12 meters) in its 10th sortie.

Ingenuity hitched a ride to the Red Planet on Perseverance, which landed on Feb. 18 2021. It was designed as a technology demonstration and carries no science payloads on board. Its mission was to prove that humanity can fly powered vehicles on Mars.

After Ingenuity achieved its tech demo goals, the helicopter entered its current operations demonstration phase to test its abilities as an aerial explorer, quickly imaging and scouting areas of Mars. This capability has proven useful to Perseverance operators and scientists. During its most recent flights, Ingenuity has surveyed areas of particular interest for Perseverance to potentially explore in its hunt for signs of ancient life.

“The helicopter has succeeded in ways the Ingenuity team could only have imagined at the outset of this project,” said Ingenuity Operations Lead Teddy Tzanetos. “The small but mighty team behind this small but mighty rotorcraft is, needless to say, thrilled at its success and honored for the acknowledgment. We’re also eager to see what comes next with the operations demonstration.”

The helicopter is paving the way for possible future missions that could use rotorcraft to help scout, explore, and even carry science payloads on other worlds.

The Laureate award will be presented at a ceremony in October in McLean, Virginia. Full list of 2021 Laureate Award winners.