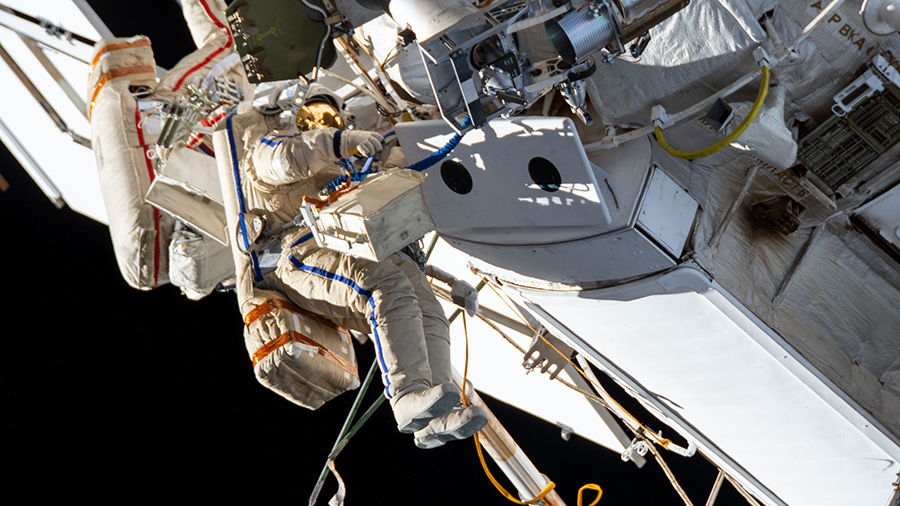 Two Expedition 65 cosmonauts are ready for their second spacewalk to continue outfitting Russia’s new science module on Thursday. Meanwhile, another spacewalk is due to take place on Sunday to modify the International Space Station’s power system.

Cosmonauts Oleg Novitskiy and Pyotr Dubrov wrapped up their spacewalk reviews and Orlan spacesuit checks just before lunchtime on Wednesday. The Russian duo is ready to begin Thursday’s spacewalk set to begin at 11 a.m. EDT when they open the hatch on the Poisk airlock to the vacuum of space. NASA TV will begin its live spacewalk coverage at 10:30 a.m. on the NASA app and the agency’s website.

Another spacewalk is scheduled to start Sunday at 8:30 a.m. to install a modification kit on the station’s Port-4 (P4) truss structure. Astronauts Akihiko Hoshide and Thomas Pesquet are preparing for that spacewalk to ready the P4 for the orbiting lab’s third Roll-Out Solar Array due to arrive on a SpaceX Cargo Dragon mission early next year. NASA TV will begin its live coverage at 7 a.m. as the experienced astronauts prepare to exit the U.S. Quest airlock in their U.S. spacesuits for a six-and-a-half hour spacewalk.

Meanwhile, science and maintenance continued on the orbiting lab with the crew finding time to work on human research, biology, and combustion. Pesquet from ESA (European Space Agency) studied how astronauts grip objects and move their limbs in microgravity while NASA astronaut Shane Kimbrough fed rodents and cleaned their habitats during the morning.

NASA Flight Engineer Megan McArthur focused on orbital plumbing tasks and dismantling air resupply tanks during the morning. After lunch, she turned her attention to unpacking the Cargo Dragon vehicle then joining Vande Hei for a procedures review conference with Sunday’s spacewalkers Hoshide and Pesquet.