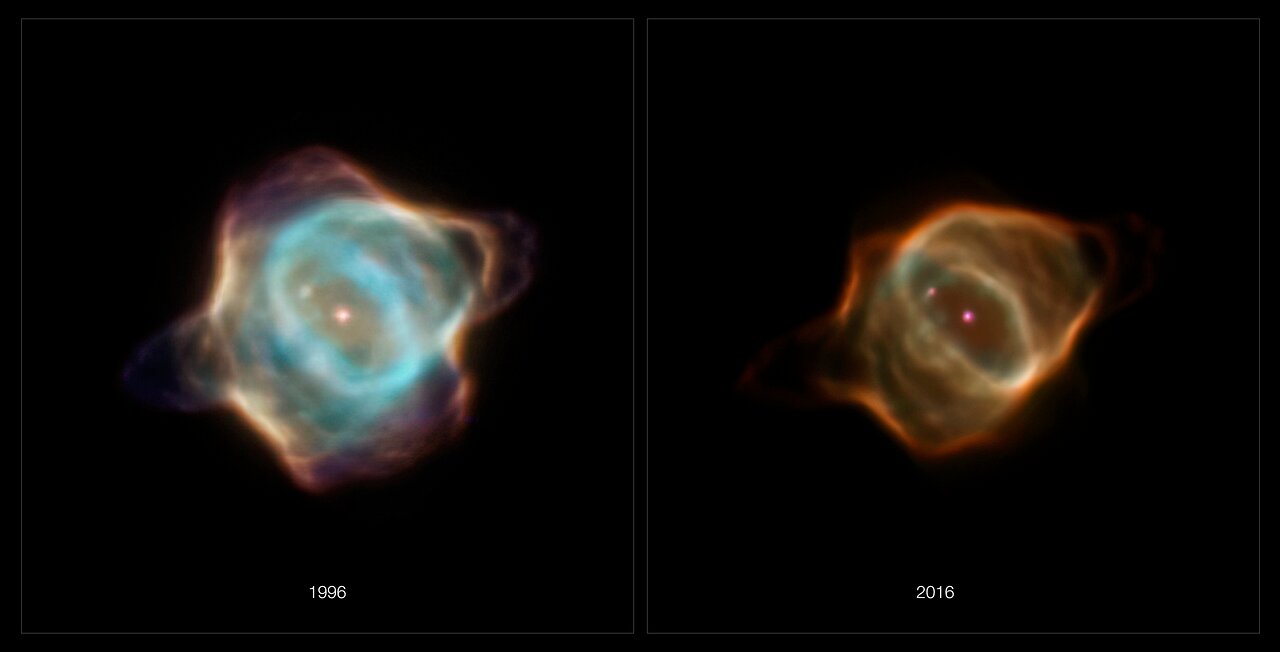 Astronomers have caught a rare glimpse of a rapidly fading shroud of gas around an aging star. Archival data from the NASA/ESA Hubble Space Telescope reveal that the nebula Hen 3-1357, nicknamed the Stingray nebula, has faded precipitously over just the past two decades. Witnessing such a swift rate of change in a planetary nebula is exceedingly without precedent, researchers say.

Even though the Universe is constantly changing, most processes are too slow to be observed within a human lifespan. However, the Stingray Nebula is now offering scientists a special opportunity to observe a system’s evolution in real time.

Images captured by Hubble in 2016, when compared to Hubble images taken in 1996, show a nebula that has drastically dimmed in brightness and changed shape. Bright blue shells of gas near the centre of the nebula have all but disappeared, and the wavy edges that earned this nebula its aquatic-themed name are virtually gone. The young nebula no longer pops against the black velvet background of the distant Universe.

Researchers discovered unprecedented changes in the light emitted by glowing gas — nitrogen, hydrogen and oxygen — that is being blasted off by the dying star at the centre of the nebula. The oxygen emission, in particular, dropped in brightness by a factor of nearly 1000.

“In most studies, the nebula usually gets bigger,” said Bruce Balick of the University of Washington, USA, who led the new research. “Here, it’s fundamentally changing its shape and getting fainter, and doing so on an unprecedented timescale.”

“Because of Hubble’s optical stability, we are very, very confident that this nebula is changing in brightness,” said team member Martin Guerrero of the Instituto de Astrofísica de Andalucía in Granada, Spain. “That easy to see since, unlike the nebula, all of the other stars in the Hubble image – including a distant companion star – stayed constant in brightness.“

The researchers note that while speculating on causes for this surprising finding, it’s important to explore the properties of the dying star at the centre of the Stingray nebula, which influences the structure and brightness of the nebula.

A 2016 study by Nicole Reindl of the University of Leicester, UK, and a team of international researchers, also using Hubble data, noted that the star at the centre of the Stingray nebula, SAO 244567, is special in its own right.

Observations from 1971 to 2002 showed the temperature of the star skyrocketing to almost ten times hotter than the surface of our Sun. Reindl speculates the temperature jump was caused by a brief flash of helium fusion that occurred outside the core of the central star. After that the star began to cool again, returning to its previous stage of stellar evolution.

The team studying the rapid fading of the Stingray nebula can only speculate at this time what’s in store for the future of this young nebula.

The Hubble Space Telescope is a project of international cooperation between ESA and NASA.

This research has been accepted for publication in the Astrophysical Journal.

The international team of astronomers in this study consists of B. Balick, M. Guerrero, and G. Ramos-Larios