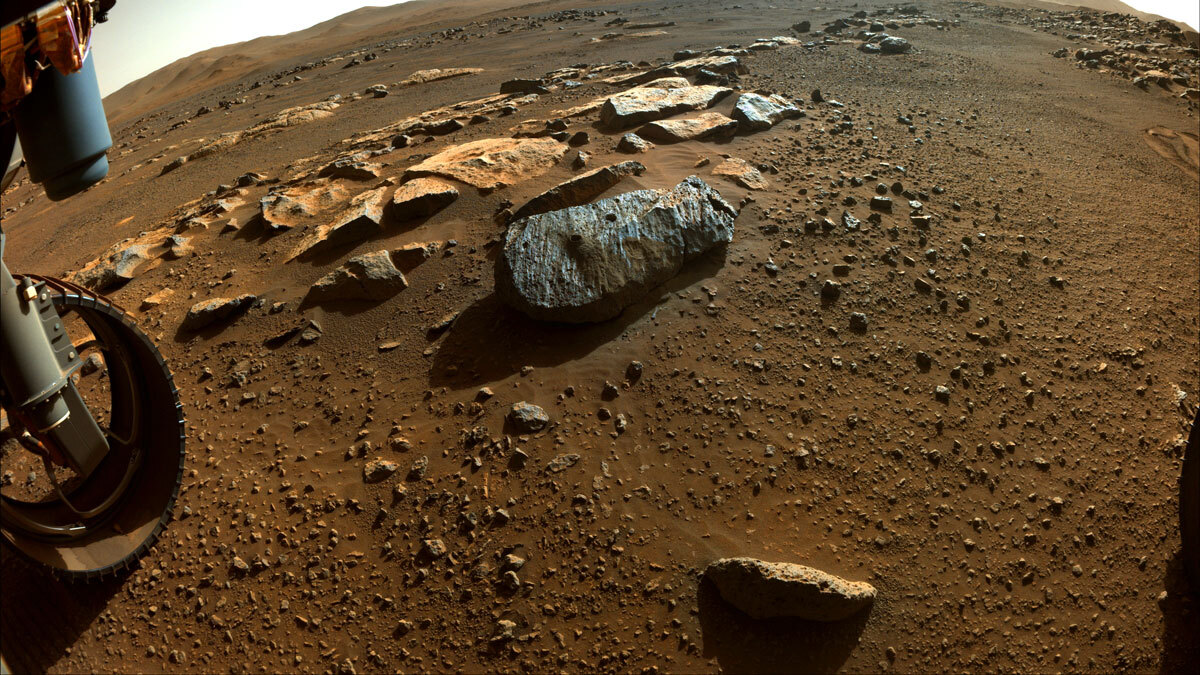 The rocks it has analyzed for sample collection are helping the team better understand a past marked by volcanic activity and water.

Analysis of the rocks from which the Montdenier and Montagnac samples were taken and from the rover’s previous sampling attempt may help the science team piece together the timeline of the area’s past, which was marked by volcanic activity and periods of persistent water.

“It looks like our first rocks reveal a potentially habitable sustained environment,” said Ken Farley of Caltech, project scientist for the mission, which is led by NASA’s Jet Propulsion Laboratory in Southern California. “It’s a big deal that the water was there a long time.”

The rock that provided the mission’s first core samples is basaltic in composition and may be the product of lava flows. The presence of crystalline minerals in volcanic rocks is especially helpful in radiometric dating. The volcanic origin of the rock could help scientists accurately date when it formed. Each sample can serve as part of a larger chronological puzzle; put them in the right order, and scientists have a timeline of the most important events in the crater’s history. Some of those events include the formation of Jezero Crater, the emergence and disappearance of Jezero’s lake, and changes to the planet’s climate in the ancient past.

What’s more, salts have been spied within these rocks. These salts may have formed when groundwater flowed through and altered the original minerals in the rock, or more likely when liquid water evaporated, leaving the salts. The salt minerals in these first two rock cores may also have trapped tiny bubbles of ancient Martian water. If present, they could serve as microscopic time capsules, offering clues about the ancient climate and habitability of Mars. Salt minerals are also well-known on Earth for their ability to preserve signs of ancient life.

The Perseverance science team already knew a lake once filled the crater; for how long has been more uncertain. The scientists couldn’t dismiss the possibility that Jezero’s lake was a “flash in the pan”: Floodwaters could have rapidly filled the impact crater and dried up in the space of 50 years, for example.

But the level of alteration that scientists see in the rock that provided the core samples – as well as in the rock the team targeted on their first sample-acquisition attempt – suggests that groundwater was present for a long time.

This groundwater could have been related to the lake that was once in Jezero, or it could have traveled through the rocks long after the lake had dried up. Though scientists still can’t say whether any of the water that altered these rocks was present for tens of thousands or for millions of years, they feel more certain that it was there for long enough to make the area more welcoming to microscopic life in the past.

“These samples have high value for future laboratory analysis back on Earth,” said Mitch Schulte of NASA Headquarters, the mission’s program scientist. “One day, we may be able to work out the sequence and timing of the environmental conditions that this rock’s minerals represent. This will help answer the big-picture science question of the history and stability of liquid water on Mars.”

Perseverance is currently searching the crater floor for samples that can be brought back to Earth to answer profound questions about Mars’ history. Promising samples are sealed in titanium tubes the rover carries in its chassis, where they’ll be stored until Perseverance drops them to be retrieved by a future mission. Perseverance will likely create multiple “depots” later in the mission, where it will drop off samples for a future mission to bring to Earth. Having one or more depots increases the likelihood that especially valuable samples will be accessible for retrieval to Earth.

Perseverance’s next likely sample site is just 656 feet (200 meters) away in “South Séítah,” a series of ridges covered by sand dunes, boulders, and rock shards that Farley likens to “broken dinner plates.”

The rover’s recent drill sample represents what is likely one of the youngest rock layers that can be found on Jezero Crater’s floor. South Séítah, on the other hand, is likely older, and will provide the science team a better timeline to understand events that shaped the crater floor, including its lake.

By the start of October, all Mars missions will be standing down from commanding their spacecraft for several weeks, a protective measure during a period called Mars solar conjunction. Perseverance isn’t likely to drill in South Séítah until sometime after that period.

A key objective for Perseverance’s mission on Mars is astrobiology, including the search for signs of ancient microbial life. The rover will characterize the planet’s geology and past climate, pave the way for human exploration of the Red Planet, and be the first mission to collect and cache Martian rock and regolith –broken rock and dust.

Subsequent NASA missions, in cooperation with ESA (European Space Agency), would send spacecraft to Mars to collect these sealed samples from the surface and bring them to Earth for in-depth analysis.