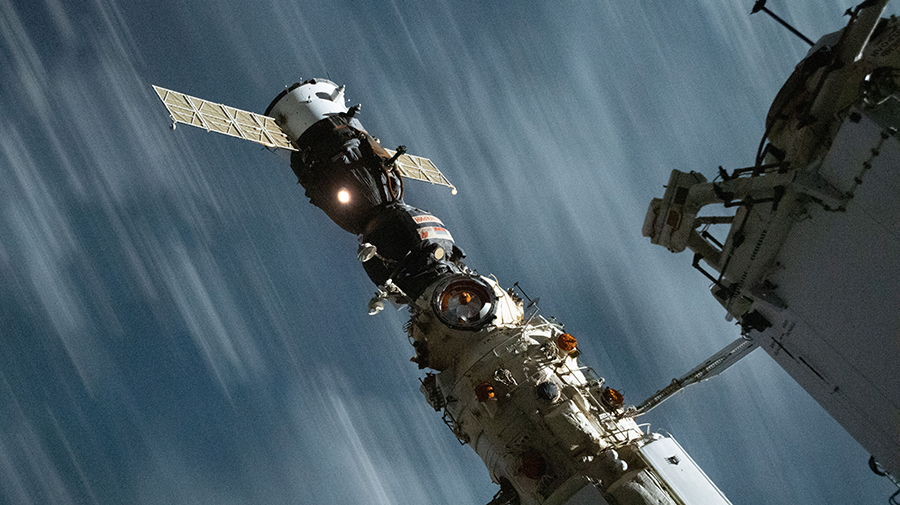 Russia rolled out its Soyuz rocket in Kazakhstan early Friday morning that will launch three crewmates to the International Space Station next week. On the other side of the Earth, the SpaceX Cargo Dragon vehicle completed its mission Thursday night after splashing down in the Atlantic Ocean.

The next mission to the orbiting lab is due to blast off on Tuesday at 4:55 a.m. EDT from the Baikonur Cosmodrome. Veteran cosmonaut Anton Shkaplerov will command the near three-and-a-half hour ride to the station’s Rassvet module aboard the Soyuz MS-19 crew ship. Sitting to either side of Shkaplerov during the short flight will be Russian spaceflight participants Klim Shipenko and Yulia Peresild.

Back on orbit, the seven-member Expedition 65 crew juggled a variety of science activities and maintenance tasks. The orbital residents also worked on U.S. crew ship inspections and Russian cargo transfers.

Kimbrough and McArthur also partnered up during the afternoon inspecting life support systems inside the SpaceX Crew Dragon Endeavour. The pair along with astronauts Akihiko Hoshide of the Japan Aerospace Exploration Agency (JAXA) and Thomas Pesquet of ESA (European Space Agency) are due to return to Earth aboard Endeavour in November.

Cosmonaut Oleg Novitskiy is packing up and gathering items, getting ready for his return to Earth on Oct. 18 inside the Soyuz MS-18 crew ship. Novitskiy will be parachuting to a landing in Kazakhstan with the two spaceflight participants Shipenko and Peresild. Vande Hei and Roscosmos Flight Engineer Pyotr Dubrov, who launched to space with Novitskiy in April, will stay on the station for another five months.