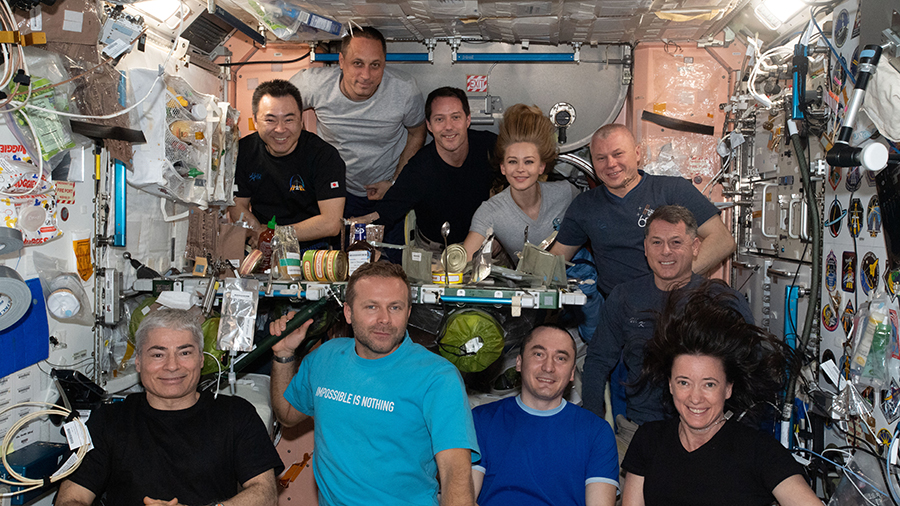 A veteran cosmonaut will soon lead two Russian spaceflight participants on a ride through Earth’s atmosphere to a parachuted landing in Kazakhstan this weekend. Meanwhile, the rest of the Expedition 65 crew stayed focused on a multitude of science, cargo, and maintenance activities throughout Thursday.

Soyuz Commander Oleg Novitskiy will complete his third station mission when he undocks from the Nauka multipurpose laboratory on Saturday at 9:14 p.m. EDT inside the Soyuz MS-18 crew ship. He, with the station’s two filmmaking guests Yulia Peresild and Klim Shipenko riding alongside him, will touchdown on the Kazakh steppe on Sunday at 12:36 a.m. (10:36 a.m. Kazakh time).

Novitskiy has been packing the Soyuz spacecraft for several days with station hardware, science samples and personal items. He has also been practicing Soyuz descent techniques and training for the departure maneuvers on a Russian computer. The three-time station resident, with assistance from cosmonaut Pyotr Dubrov, has also been testing a specialized suit, the lower body negative pressure suit, that may help his body adjust quickly to Earth’s gravity after 191 days in space.

The station’s three NASA flight engineers had their hands full today with a host of research and lab upkeep activities in the orbiting lab’s U.S. segment. Megan McArthur swapped fuel bottles inside the Combustion Integrated Rack then performed simulated robotic tasks for a cognition test. Shane Kimbrough had some light plumbing duties during the morning before continuing cargo work inside the Cygnus space freighter. Mark Vande Hei, who is staying on the station for nearly a year, filmed a video about safety in space for students on Earth then worked on life support and networking gear.

Over in the station’s Russian segment, Roscosmos Flight Engineer Anton Shkaplerov worked on an exercise study and dismantled a radiation detector. Dubrov downloaded and checked radiation data then configured radiation sensors, or dosimeters.