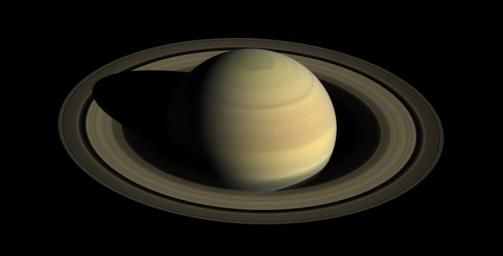 Saturn’s rings aren’t just a beautiful adornment — scientists can use the feature to understand what’s happening deep inside the planet.

By using the famous rings like a seismograph, scientists studied processes in the planet’s interior and determined that its core must be “fuzzy.” Instead of a solid sphere like Earth’s, the core of Saturn appears to consist of a ‘soup’ of rocks, ice and metallic fluids that slosh around and affect the planet’s gravity.

The new study used data from NASA’s Cassini mission, which orbited Saturn and its moons for 13 years between 2004 and 2017. In 2013, data from the mission revealed for the first time that Saturn’s innermost ring, the D-ring, ripples and swirls in ways that cannot be entirely explained by the gravitational influences of the planet’s moons. The new study looked at these motions in Saturn’s rings in greater detail to gain insight into the processes in its interior.

For more than a decade, NASA’s Cassini spacecraft shared the wonders of Saturn and its family of icy moons—taking us to astounding worlds where methane rivers run to a methane sea and where jets of ice and gas are blasting material into space from a liquid water ocean that might harbor the ingredients for life.

Cassini revealed in great detail the true wonders of Saturn, a giant world ruled by raging storms and delicate harmonies of gravity.

Cassini carried a passenger to the Saturn system, the European Huygens probe—the first human-made object to land on a world in the distant outer solar system.

After 20 years in space — 13 of those years exploring Saturn — Cassini exhausted its fuel supply. And so, to protect moons of Saturn that could have conditions suitable for life, Cassini was sent on a daring final mission that would seal its fate. After a series of nearly two dozen nail-biting dives between the planet and its icy rings, Cassini plunged into Saturn’s atmosphere on Sept. 15, 2017, returning science data to the very end.

“We used Saturn’s rings like a giant seismograph to measure oscillations inside the planet,” Jim Fuller, assistant professor of theoretical astrophysics at Caltech and one of the authors of the paper said in a statement. “This is the first time we’ve been able to seismically probe the structure of a gas giant planet, and the results were pretty surprising.”

Not only does the planet’s core seems sludgy, it also appears to extend across 60% of the planet’s diameter, making it much larger than previously estimated.

The analysis showed that Saturn’s core might be about 55 times as massive as the entire planet Earth. Of the total mass of the core, 17 Earth masses are made of ice and rock, with the rest consisting of hydrogen and helium-based fluid, the study suggests.

The lead author of the study, Christopher Mankovich, a postdoctoral scholar research associate in planetary science who works in Fuller’s group, explained that the motions in the core cause Saturn’s surface to constantly ripple. These surface waves create minuscule changes in the planet’s gravity that subsequently affect the rings.

“Saturn is always quaking, but it’s subtle,” Mankovich said in the statement. “The planet’s surface moves about a meter [3 feet] every one to two hours like a slowly rippling lake. Like a seismograph, the rings pick up the gravity disturbances, and the ring particles start to wiggle around.”

According to scientists, the nature of those ring ripples suggests that the core, despite its sloshing, is composed of stable layers of various densities. Heavier materials sit around the center of the planet and don’t mix with the lighter materials closer to the surface.

“In order for the planet’s gravitational field to be oscillating with these particular frequencies, the interior must be stable, and that’s only possible if the fraction of ice and rock gradually increases as you go in toward the planet’s center,” Fuller said.

Mankovich compared the material in the core to sludge,  adding that the layered but liquid nature of the core is akin to the salinity of Earth’s oceans, which increases with depth.

“The hydrogen and helium gas in the planet gradually mix with more and more ice and rock as you move toward the planet’s center,” Mankovich said.

The findings might challenge some of the established models of the formation of gas giants, planets with no hard surface, which are composed mainly of hydrogen and helium, the study suggests. These models assume that the rocky cores of these planets formed first and then attracted large envelopes of gas. If the cores of the planets are, however, fuzzy as the study indicates, the planets might instead incorporate gas earlier in the process.

In fact, recent findings by NASA’s Juno mission suggest that another of the solar system’s gas giants, Jupiter, might also have a similarly fuzzy core.

“Christopher [Mankovich] and Jim [Fuller] were able to show that one particular ring feature provided strong evidence that Saturn’s core is extremely diffuse,” said Matt Hedman, a planetary scientist at the University of Idaho, who was part of the team that first discovered that the motions in Saturn’s rings can’t be fully explained by the gravity of its moons.

“I am excited to think about what all the other ring features generated by Saturn might be able to tell us about that planet,” added Hedman, who did not collaborate on the new paper.

The research is described in a paper published Monday (Aug. 16) in the journal Nature.

Juno will improve our understanding of the solar system’s beginnings by revealing the origin and evolution of Jupiter.

The Giant Planet Story is the Story of the Solar System

Juno’s principal goal is to understand the origin and evolution of Jupiter. Underneath its dense cloud cover, Jupiter safeguards secrets to the fundamental processes and conditions that governed our solar system during its formation. As our primary example of a giant planet, Jupiter can also provide critical knowledge for understanding the planetary systems being discovered around other stars.

With its suite of science instruments, Juno will investigate the existence of a solid planetary core, map Jupiter’s intense magnetic field, measure the amount of water and ammonia in the deep atmosphere, and observe the planet’s auroras.

Juno will let us take a giant step forward in our understanding of how giant planets form and the role these titans played in putting together the rest of the solar system.

T. Pyle (SSC) Theories about solar system formation all begin with the collapse of a giant cloud of gas and dust, or nebula, most of which formed the infant sun. Like the sun, Jupiter is mostly hydrogen and helium, so it must have formed early, capturing most of the material left after our star came to be. How this happened, however, is unclear. Did a massive planetary core form first and gravitationally capture all that gas, or did an unstable region collapse inside the nebula, triggering the planet’s formation? Differences between these scenarios are profound.

Even more importantly, the composition and role of icy planetesimals, or small proto-planets, in planetary formation hangs in the balance – and with them, the origin of Earth and other terrestrial planets. Icy planetesimals likely were the carriers of materials like water and carbon compounds that are the fundamental building blocks of life.

Unlike Earth, Jupiter’s giant mass allowed it to hold onto its original composition, providing us with a way of tracing our solar system’s history. Juno will measure the amount of water and ammonia in Jupiter’s atmosphere and determine if the planet actually has a solid core, directly resolving the origin of this giant planet and thereby the solar system. By mapping Jupiter’s gravitational and magnetic fields, Juno will reveal the planet’s interior structure and measure the mass of the core.

How deep Jupiter’s colorful zones, belts, and other features penetrate is one of the most outstanding fundamental questions about the giant planet. Juno will determine the global structure and motions of the planet’s atmosphere below the cloud tops for the first time, mapping variations in the atmosphere’s composition, temperature, clouds and patterns of movement down to unprecedented depths.

Deep in Jupiter’s atmosphere, under great pressure, hydrogen gas is squeezed into a fluid known as metallic hydrogen. At these great depths, the hydrogen acts like an electrically conducting metal which is believed to be the source of the planet’s intense magnetic field. This powerful magnetic environment creates the brightest auroras in our solar system, as charged particles precipitate down into the planet’s atmosphere. Juno will directly sample the charged particles and magnetic fields near Jupiter’s poles for the first time, while simultaneously observing the auroras in ultraviolet light produced by the extraordinary amounts of energy crashing into the polar regions. These investigations will greatly improve our understanding of this remarkable phenomenon, and also of similar magnetic objects, like young stars with their own planetary systems.

Learn more about the motivation behind Juno at the mission website.

In Greek and Roman mythology, Jupiter drew a veil of clouds around himself to hide his mischief. It was Jupiter’s wife, the goddess Juno, who was able to peer through the clouds and reveal Jupiter’s true nature. The Juno spacecraft will also look beneath the clouds to see what the planet is up to, not seeking signs of misbehavior, but helping us to understand the planet’s structure and history.

The Juno mission is the second spacecraft designed under NASA’s New Frontiers Program. The first is the Pluto New Horizons mission, which flew by the dwarf planet in July 2015 after a nine-and-a-half-year flight. The program provides opportunities to carry out several medium-class missions identified as top priority objectives in the Decadal Solar System Exploration Survey, conducted by the Space Studies Board of the National Research Council in Washington.

JPL manages the Juno mission for the principal investigator, Scott Bolton, of Southwest Research Institute in San Antonio. The Juno mission is part of the New Frontiers Program managed at NASA’s Marshall Space Flight Center in Huntsville, Ala. Lockheed Martin Space Systems, Denver, built the spacecraft. Launch management for the mission is the responsibility of NASA’s Launch Services Program at the Kennedy Space Center in Florida. JPL is a division of the California Institute of Technology in Pasadena.