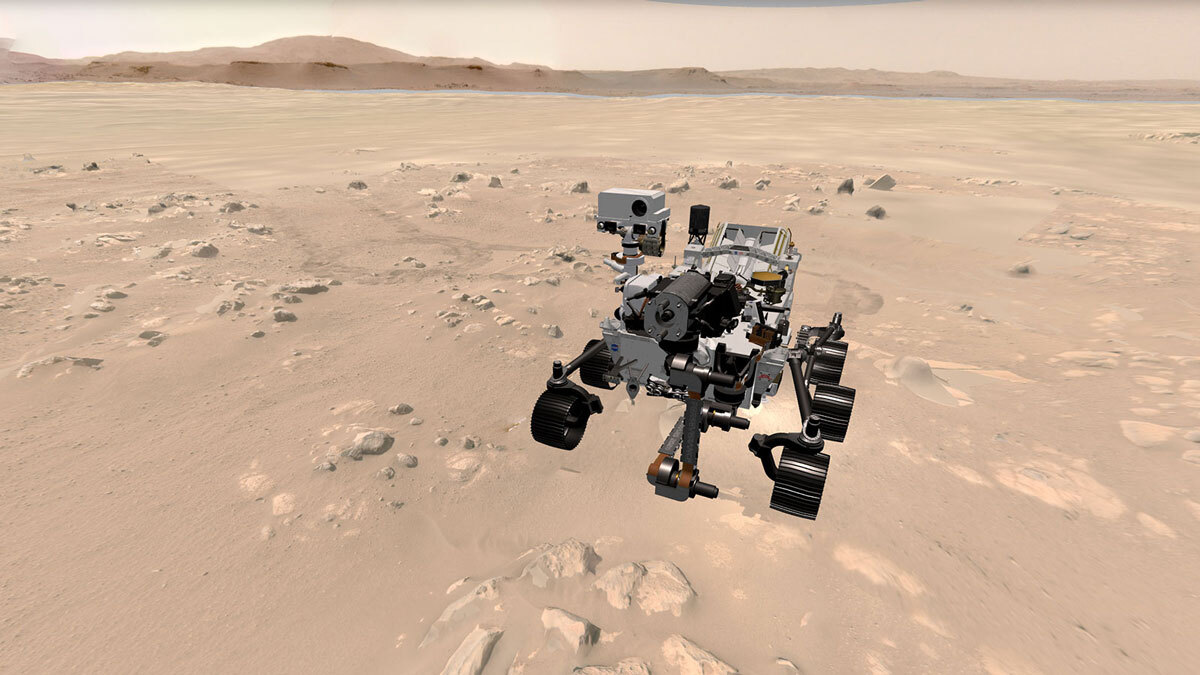 Two interactive web experiences let you explore the Martian surface, as seen by cameras aboard the rover and orbiters flying overhead.

It’s the next best thing to being on Mars: Two online interactive experiences let you check out Jezero Crater – the landing site and exploration locale for NASA’s Perseverance rover – without leaving our planet.

One new experience, called “Explore with Perseverance,” allows you to follow along with the rover as though you were standing on the surface of Mars. Another interactive – “Where Is Perseverance?” – shows the current location of the rover and Ingenuity Mars Helicopter as they explore the Red Planet. It’s updated after every drive and flight and allows you to track the progress of Perseverance and Ingenuity, in their journeys on and above the Red Planet.

Explore with Perseverance is made mostly with images taken by the rover from various vantage points, with additional images from the HiRISE (High Resolution Imaging Experiment) camera aboard NASA’s Mars Reconnaissance Orbiter overhead.

“It’s the best reconstruction available of what Mars looks like,” said Parker Abercrombie, a senior software engineer who is leading the software development at NASA’s Jet Propulsion Laboratory in Southern California. The agency’s Mars Public Engagement team recruited Abercrombie and his colleagues, who work on similar tools for the mission team, to develop a public-friendly experience by stitching together and reconstructing the Perseverance and HiRISE images.

The team plans to update the site regularly with new views from the spacecraft and the rover and some new points of interest, as they are found. For example, says Abercrombie, “we can highlight scientifically interesting rocks and other features, or the Ingenuity helicopter flight locations.”

Abercrombie believes the site will help people understand the perspective as if they were on Mars. “It’s sometimes hard for people to grasp location and distance from Mars images. It’s not like here on Earth, where you can get your bearings by looking at trees and buildings. With the Martian terrain, it can be really hard to wrap your head around what you’re seeing.”

The dashboard makes it easy for parents and teachers to share the 3D views with kids, bringing them along as Perseverance explores.

The 3D tool is based on the Advanced Science Targeting Tool for Robotic Operations (ASTTRO) that the rover’s science team uses to select interesting targets for the rover to study – but has been modified to make it more user-friendly.

“It’s a unique challenge to set things up so people can browse in a way they’ll understand, since users have varying experiences in using 3D environments,” Abercrombie said. “This is a great opportunity for the public to follow along with the mission, using the same type of visualization tools as the mission scientists.”

The Curiosity mission has a similar experience built by the same team.

A Mars Map of the Rover and Helicopter Journeys

“The Where Is Perseverance? map allows you to see more of what we’re doing and where we’re going,” said JPL Mapping Specialist Fred Calef. It, too, is based on ASTTRO, and Calef notes that you’ll get the data almost as fast as the engineers and scientists do. Plus, you’re using practically the same software the team uses, “so everyone can explore the way we explore in almost the same way,” Calef says, zooming in, zooming out, and panning around.

The map shows the rover’s route and its stopping points with markers indicating the Martian day, or sol, and you’ll get the overview of where Perseverance and Ingenuity might head next. Terrain maps like this one allow scientists to spot interesting places to look for possible evidence of ancient life, and you’ll be able to share in the journey.

When Ingenuity flies, it’s usually a burst of activity and then a lull for a couple of weeks. The rover, says Calef, “drives more often, though not as far, traveling around 130 meters [142 yards] on its longest drive [sols] to date. When we find a geologically interesting spot, we’ll stop for a week or so to check it out.”

You can get more news about the activities of Curiosity on Mars at the Mars Science Laboratory/Curiosity website, and follow the latest about Perseverance at the Mars 2020/Perseverance website.

A key objective for Perseverance’s mission on Mars is astrobiology, including the search for signs of ancient microbial life. The rover will characterize the planet’s geology and past climate, pave the way for human exploration of the Red Planet, and be the first mission to collect and cache Martian rock and regolith (broken rock and dust).